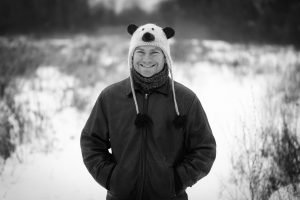 Jason Leaver (he/him) is an innovative storyteller and a digital community builder who excels in any medium he sets his mind to. He’s known for having built a massive and dedicated online audience for his acclaimed web series Out With Dad even before “web series” was in our vocabulary. Whether it’s for corporate videos, web, film/television, video games, VR, or podcasts, his focus is always on audience engagement through story.

He is currently developing an investigative podcast that will examine the historical and cultural impact of the famous (alleged) breaking and entering crime that took place once upon a time, at the residence of three bears.

In 2017 he started learning the video game engine Unity, as a solution for an interactive 360 film project that was in development. While that project isn’t happening anymore (unless, you’ve got a spare $150K?), he continued his education with Unity and is creating a story-driven platformer that can be played on desktop or in VR.